A map-based tool for municipalities to model electrification incentives.

BlocPower is a climate technology company rapidly upgrading American cities by modernizing heating and cooling systems in urban buildings. With a focus on underserved communities, their work makes energy consumption cleaner and saves people money. Since their founding in 2014, they’ve completed over 1200 clean energy projects and raised over $50 million. One of their most recent investments came from the Bezos Earth Fund who awarded BlocPower $5.3 million, in part due to a demo of the product we designed and built with them in just 6 weeks: BlocMaps.

When we teamed up with BlocPower, they had an early version of a tool called BlocMaps that helped municipalities view data about their city’s buildings in an interactive map. Through this first iteration they’d learned that users didn’t find quite understand how to use it. They hired us to redesign and help rebuild the tool so that all the work their data and tech teams had done wouldn’t be locked behind an imperfect user experience.

“You helped build better practices for the whole team. You created a good structure to increase clarity and allow us to move faster.” 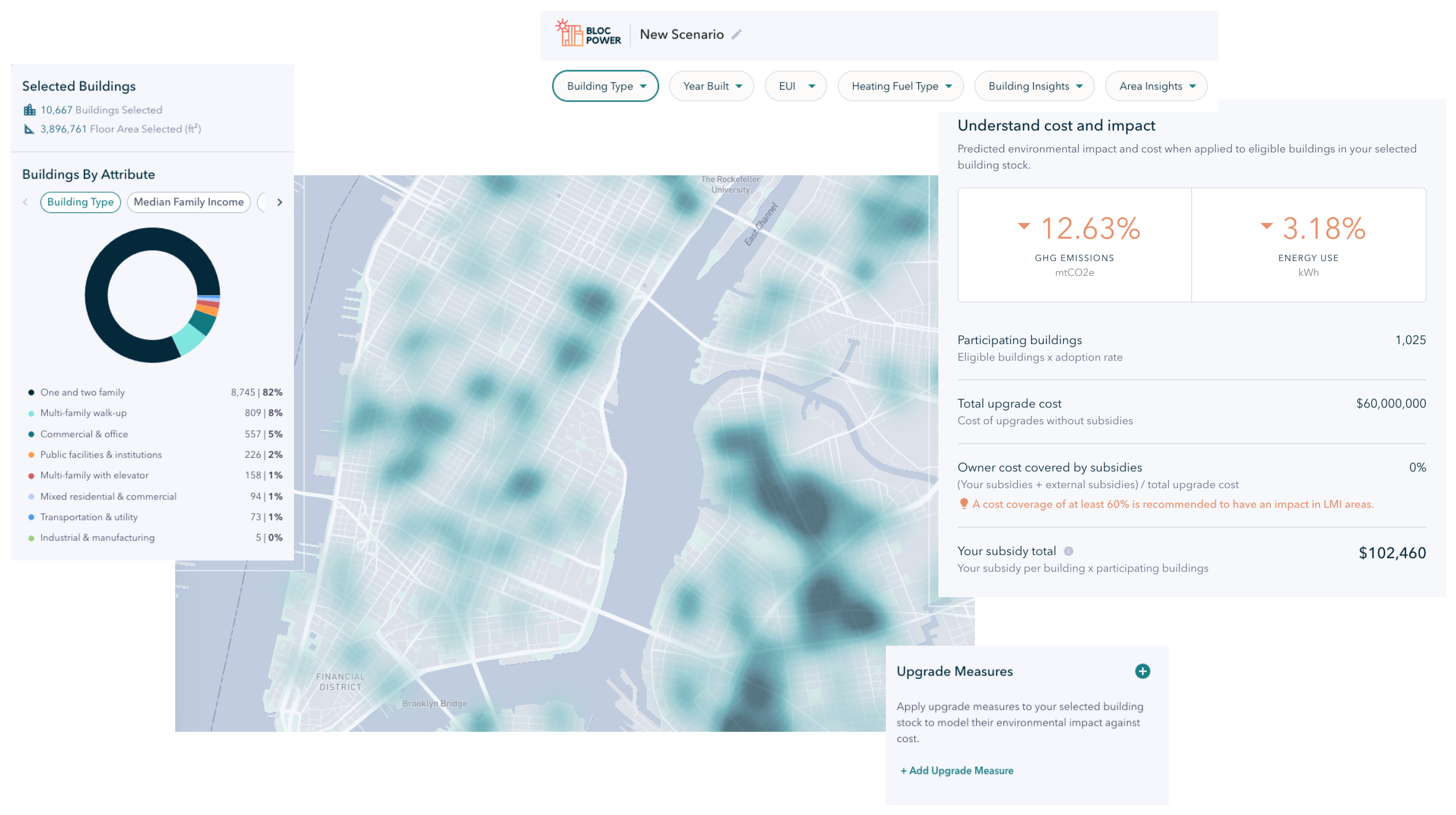 When you apply filters, the heatmap of results shows.

We pride ourselves in considering and prioritizing the user’s experience throughout the creation process. We learned what BlocMaps users needed through in-depth interviews. These interviews gave us what we needed to create a detailed user persona and map their journey through the electrification program creation process. With a user persona and journey map as a foundation, it was possible to design the simplest possible solutions to create user value.

So, who is the BlocMaps persona? Polly Programer is the Director of Sustainability for the City of Crofton. She wants to design a program to decrease carbon emissions in Crofton’s commercial buildings by 30%. If she comes up with a great plan, she could receive a $10 million grant from her state’s government to complete the project, but she’s not quite sure where to start. There are a thousand different ways she could incentivize businesses to participate in the program, but she needs to narrow them down to clear choices that provide enough environmental impact within her budget. So she uses BlocMaps to visualize the problems before her, list potential solutions, estimate their costs and environmental impact, and generate reports for her grant application.

Customer journey map to identify where BlocMaps could fit in.

As we began working on the project, we ran into a problem. BlocPower has a world class team and has collected an immense amount of data, but different teams within BlocPower were using different words to describe the same things. So we helped create a new, shared language. We defined categories of data, organized them in a data diagram, and presented them to the BlocPower team (think Spanish class, but better).

Left: Data definitions and relationships. The nested structure of all these pieces informed our paradigms (below). Right: Diagram to understand and align everyone around the retrofit ROI calculations.

There’s a saying in architecture. “Big ideas, big pencil. Small ideas, small pencil.” Before we design in detail, we want to make sure we’re all on the same page about the overall direction of the project.  What we realized during interviews is that this is likely to be a tinkering, back and forth process because no one knows exactly what they want until they see it. In other words, it’s more like Photoshop than it is an ecommerce checkout flow. In order to demonstrate this, we came up with three potential paradigms, one of which a “Photoshop calculator tool.” We explained why we thought this direction would make most sense from a user value perspective. Once we decided with the BlocPower team to go with this direction, we could wireframe and code in increasing levels of detail until we arrived at the final version that’s online today.

“We love your process. It’s easy to work with because it doesn’t take a lot of time from us and you always find ways to add value to high-stakes, non-linear situations.”

Sketches of 3 different paradigms. From left to right: “3-step process”, “The dramatic reveal”, and “all-in-one calculator” which we chose.

“For a very technical product with lots of industry-specific knowledge and lingo, you all ran up the learning curve well... and fast!”

We love learning about climate tech and helping founders.

Thank you!
Your submission has been received. We'll follow up with you shortly.
Oops! Something went wrong while submitting the form.

Get short biz update emails 2-4 times a year. You’ll learn about studio happenings, lessons learned, and plans for the future.

Thanks, you're on the list!
Oops! Something went wrong while submitting the form.

Copyright © 2022 LifeLike Labs LLC. All Rights Reserved. Special thanks to @usgs via Unsplash for the incredible photos.